Sustran-discuss alerted me to a new paper, ‘Public Transport Reforms in Seoul: Innovations Motivated by Funding Crisis’ by John Pucher, Hyungyong Park, Mook Han Kim and Jumin Song, in the Journal of Public Transportation, Vol. 8, No. 5, 2005.

Necessity seems to have been the mother of invention.

‘…the acute funding crisis of ’s public transport system has prompted a complete re-examination of ways to improve service quality while keeping costs and subsidies affordable.’

High-profile physical changes, like the median busways and ticketing changes, are just part of the story. Please don’t ignore the important but unglamorous regulatory reforms that are crucial to achieving a more integrated public transport system.

‘the Seoul Metropolitan Government greatly increased its control over bus routes, schedules, fares, and overall system design. It introduced what it calls a “semi-public operation system” that retains private bus firms but leaves route, schedule, and fare decisions to the Seoul Metropolitan Government. Moreover, it now reimburses bus ﬁrms on the basis of vehicle km of service instead of passenger trips…’ (p.48)

‘Fares are now based only on distance traveled, with free transfers permitted between bus lines as well as between metro and bus.’ (p.51)

By the way, these changes are similar to those introduced on Bogotá’s TransMileneo BRT system and its feeders. A recent World Bank discussion paper praises such ‘hybrid’ regulatory arrangements for urban bus systems in developing countries. (A Estache, A Gomez-Lobo, C Santiago (2004) The Limits to Competition in Urban Bus Services in Developing Countries, World Bank Policy Research Working Paper 3207, see here for pdf) 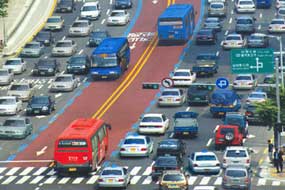 The initial public response was actually disastrous, with a period of confusion and frustration! But after a month or so the confusion eased and teething problems with the ticketing system were ironed out. Public reactions then turned very positive.

Benefits claimed so far include impressive increases in bus speeds (especially on the BRT corridors), reductions in bus-related accidents, and an upward trend in bus passenger numbers (about 700,000 extra per day without a drop in subway use).

Operating subsidies for the bus system have risen however. But the authors argue that this should be set against reduced expenditure on metro/subway extensions with their associated debt servicing and operating deficits.

Seoul's future public transport expansion plans (to complement the existing enormous subway and suburban rail systems) are now mostly focused on Bus Rapid Transit (BRT) with some LRT. By the way, the publictransit.us blog has a nice list of links to Korean mass transit sites.

Seoul's Mayor, Myung-Bak LEE and transport specialists at the Seoul Development Institute (SDI) led by Dr Gyengchul KIM and Dr Keeyeon HWANG, apparently deserve much of the credit. At the recent TRB annual meeting, the Institute for Transportation and Development Policy (ITDP) gave a special award to Mayor Lee for his contributions to Seoul's sustainable transport successes. International Association of Public Transport (UITP) has also honoured Mayor Lee and the Seoul Metropolitan Government a special award for “extraordinary success at implementing so many transit reforms in such a short period of time, integrating innovative technologies with new infrastructure” (p.58)

I suspect that some credit should also go to the long-term efforts of the green transport movement in , led by the non-profit NGO, ‘Network for Green Transport’ (site in Korean only). Over more than a decade they have helped prepare the ground of public and expert opinion for reforms like these.

One question troubles me

I wonder if the bus reforms have had any effect beyond the boundaries of the City of Seoul? After all, the Seoul Metropolitan Government’s area accounts for only about half of the 22 million people or so in the wider metropolitan area, which includes and much of the province of Kyonggi-do.

Excellent Paul. Might I recopy to the New Mobility Blog?

In a belated answer to your final question, I would reply that yes the reform has affected suburban bus transit as well. Bus colour coding (green neighborhood buses, blue inner city long distance buses, red suburban buses) applies to buses linking Seoul to Gyeonggi-do cities (red). Lanes are reserved for vehicles carrying more than 8 passengers on certain motorways leaving Seoul, including importantly the southbound one which services major population centers in Gyeonggi-do). And Seoul's fare system (and consequently bus governance system probably) also applies, so you can travel to the suburbs with the same card used in Seoul. This requires cooperation between Gyeonngi-do city governments, under the leadership of Seoul Metropolitan Government.